Nestled between the Pacific Ocean and Santa Ynez Mountains, Goleta is home to sun, surf and cutting-edge technology. Incorporated in 2002, the City of Goleta is home to more than 32,000 residents. It boasts a progressive and entrepreneurial business community, that dates to the 1970’s. Our safe and active community prides itself on the exceptional quality of life available to its residents.

The Goleta community exemplifies diversity and balance in areas such as new start-ups and long-established and thriving businesses, quiet and safe neighborhood streets, and wide-open spaces. Goleta is the employment hub of Santa Barbara County with a variety of high-tech and manufacturing companies. Goleta is also the infrared capital of the world. The proximity to the University of California, Santa Barbara, gives Goleta continuous access to a talented workforce. Known as the American Riviera, the City of Santa Barbara was incorporated in 1850, although evidence of human habitation dates back at least 13,000 years ago. Santa Barbara is well known for its rich history, year-round Mediterranean-style climate, beautiful mountain range and iconic beaches. This coastal community is south facing and nestled between the Los Padres National Forest and just 20 miles offshore from the Channel Islands National Park allowing its visitors and residents to be within 15 minutes of visiting the mountains to the beach. It’s iconic views and breathtaking city scape of red tile roofs and Spanish style architecture maintains a certain charm for its visitors and residents.

A popular tourist destination for many, Santa Barbara is also a well-known community and home to approximately 91,000 residents living in roughly 11 unique neighborhoods. Its diverse residents range from students, single-family homes, multi-family homes and young professionals. The local economy is comprised of many sectors including education, service, technology, health care, agriculture, manufacturing, local government and finance, to name a few. Among the many sectors, Santa Barbara is also known for a large variety of powerful non-profit organizations serving as home to an estimated 4,500 501c3 organizations across the county.

Montecito has also gained national attention over the years for drawing celebrities to the market including the likes of Julia Louis-Dreyfus, Oprah Winfrey and Prince Harry and Meghan Markle. 2019 Travel + Lifestyle listed Montecito as one of “The Best Places to Travel.” Montecito’s luxurious lifestyle is well known for its sprawling estates, high-end hotels, exclusive dining establishments and boutique retail stores, to name a few. Just south of Montecito and north of Carpentaria is the small community of Summerland. Set on the coastal bluffs overlooking the Pacific Ocean, just off Highway 101.  Home to approximately 1,500 residents, Summerland rests on a hillside overlooking the beautiful coastline.  Known to locals for its tasty eateries, exquisite antique shops, and boutique home and garden retailers.  Summerland is home to a variety of small, unique businesses in addition to just one school and one Presbyterian Church.

Carpinteria beach is known for its gentle slope and calm waves but also commands good surfing swells in some of the rockier areas. Seals and sea lions, as well as an occasional gray whale, can be seen at the rookery along the Carpinteria Bluffs from December through May. A popular campground is located adjacent to the beach and close by is a wildlife sanctuary at Carpinteria Salt Marsh Reserve.

Carpinteria is home to some of Santa Barbara County’s largest and most successful companies. Carpinteria’s economy is based on agriculture, tourism/retail, light industry, and research and development. Carpinteria is a jobs center. The number of workers located in Carpinteria exceeds the number of residents in the Valley’s labor force. 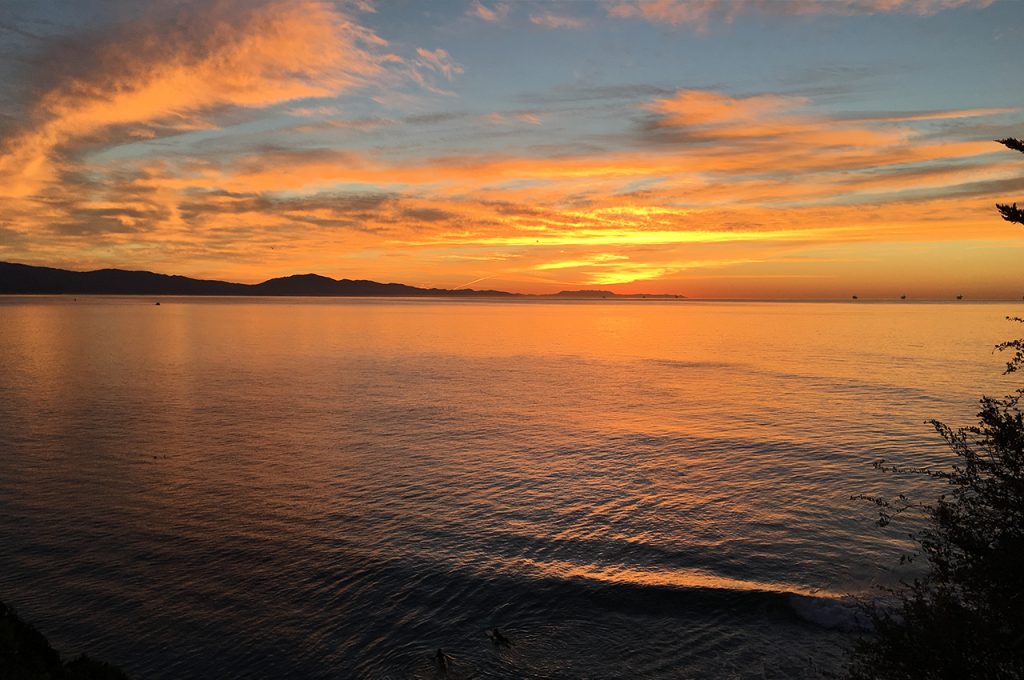 Santa Barbara County is located in the heart of the California Central Coast. Encompassing a total area of 3,789 miles, the county is naturally divided between North and South with the Santa Ynez Mountain range in the middle. The county has a total population 446,499 with the largest concentration on the southern coastal plain, referred to as the “south coast”, which includes Goleta, Santa Barbara, Carpinteria and the unincorporated areas of Hope Ranch, Summerland, Mission Canyon, Montecito, and Isla Vista. North of the Santa Ynez range you’ll find the towns of Solvang, Buellton, Lompoc, and the unincorporated towns of Santa Ynez, Los Olivos, and Ballard. Making up the furthest north areas of the county are the cities of Santa Maria, Guadalupe, and the unincorporated towns of Orcutt, Los Alamos, Casmalia, Garey, and Sisquoc. Beyond the southern continental land mass of the county, you will find the four Channel Islands with unique native wildlife.

For thousands of years the area was home to the Chumash tribe of Native Americans and was colonized by Spanish explorers in the 1600’s before becoming one of California’s original 27 counties in 1850 at the time of statehood. Today, the county’s main economic industries include engineering, resource extraction (particularly petroleum extraction and diatomaceous earth mining), winemaking, agriculture, tourism, software development, and education.

Join Now
Upcoming Events
Sign Up For Our Newsletter